I forgot to mention a few weeks ago that I tried out a new recipe and a new food!  Sadly, it will probably never be made again when J is home because he wasn’t a fan, but I actually enjoyed this dish.

I think for most people this food brings unpleasant flavors to the mind.  It did for me too, but when I sat down and thought about it I couldn’t think of when I had actually tried them.  Now, I know I have eaten them before , but I think that it happened when I was younger and I never went near them again. 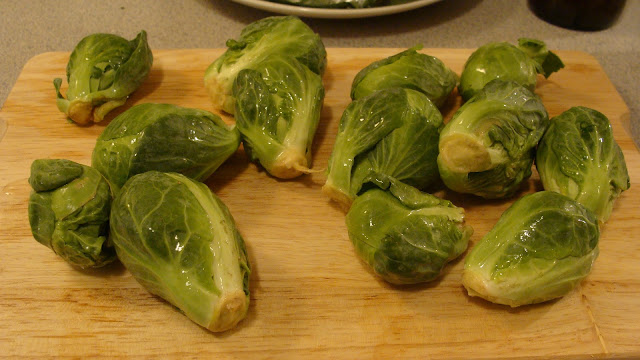 I found this recipe that made them look delicious.  I thought that since I’ve been having such a change in my palate these days (a newfound love of chili WITH beans and what’s this, cooked mushrooms actually taste good?) that I’d give them a try.

When I told J this is what we’d be having for dinner initially he gave me a face like he smelled something terrible, but when I told him that you mix bacon and avocado into the brussel sprouts he said to me “So basically you’re masking the taste of the brussel sprouts,” and he agreed to at least try it. 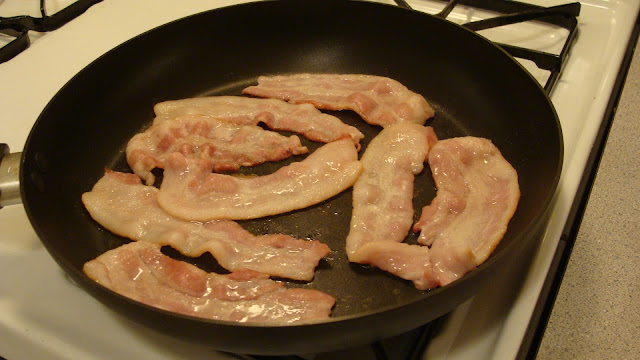 (Probably the best smelling part of the cooking process) 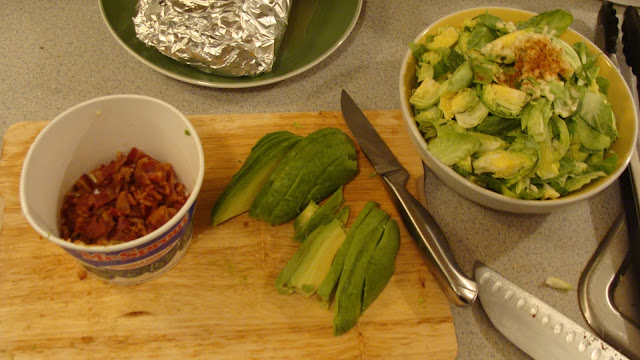 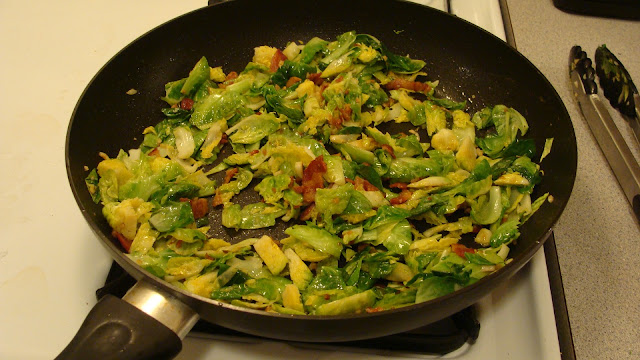 (Cook everything but the avocado) 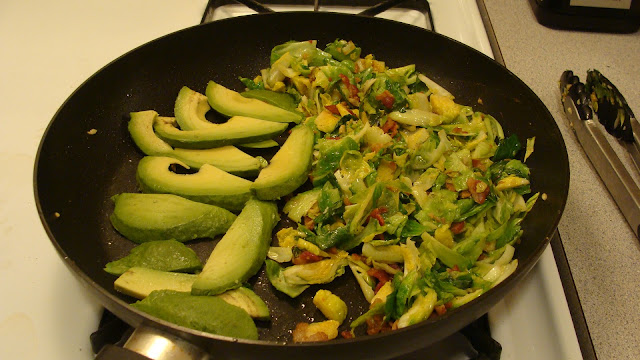 We were only having chicken on the side, but after having J doing a taste test of our brussel sprouts I decided to dice up the chicken and toss it in with the whole pan.  We had this dish, which really could be all you cook for dinner, with a side of pierogis. 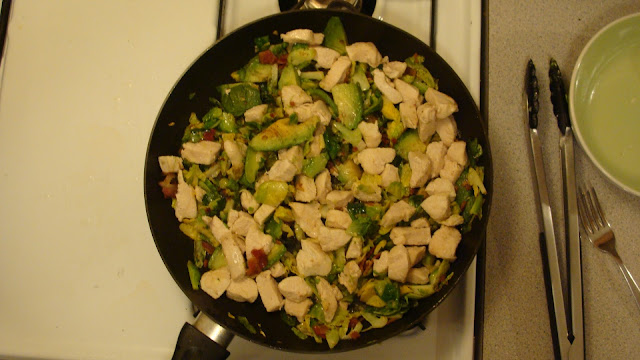 I was pleasantly surprised with the dish and would definitely make it again for myself.  It was a savory dish with just a hint of bitterness from the sprouts.  While J ate all of his, he told me he’d rather not have the dish again.  Oh well, at least we tried something new and I found out that I don’t hate brussel sprouts!
Posted by Jenny at 8:00 AM No comments:

I would apologize for my lack of posts recently, but I'm not really sorry.  J and I have been really busy in the past few weeks with jobs, adventures and enjoying the nice weather that we were having (unfortunately it turned a bit chilly-aka reality check of what March weather is supposed to be like in NJ). Between applying to whatever teaching positions I can, work, keeping on top of general chores and going for long strolls in the beautiful weather, I haven't had much time for projects or new recipes to share with you.

However, here and there I have made some advancements on some tiny projects I'm hoping to share with you in the next week.  Soon after we're heading out to Colorado to visit my brother, and my parents are going to show me around the area in which I was born.  I can't tell you how excited I am for that!  Hopefully I will have lots of pictures and stories to share with you.

That is all I have for you this evening.  Good night!
Posted by Jenny at 4:05 PM No comments:

Email ThisBlogThis!Share to TwitterShare to FacebookShare to Pinterest
Labels: Miscellaneous

I don’t know how many of you are pinterest users, but from what I can tell, the population of people who use the site is increasing rapidly!  My students, colleagues, family, and friends use it.  I’m constantly hearing people saying that they are addicted to looking through the pages or even some who have to limit their use of the site otherwise they’d spend all day on it.

I’m a member of the site and see it as such a great resource.  I’m found some of my favorite new blogs, diy ideas and recipes through the links that people pin.   The recipe I’m going to share with you today is one I came across on pinterest, but it actually comes from the Budget Savvy Diva.

I’m looking to spice up what J and I eat for meals.  This sounded like a good recipe to try because I recently found out that J likes artichokes and I like spinach so the mix works out.  J is not looking forward to the next recipe I want to try because the main ingredient is brussel sprouts! I don’t actually know if I like them or not so I want to try it out and I told J I’d make an extra vegetable just incase my recipe is unpleasant.

Anyway, back to this bake.  I made this dish for J and I we both LOVED it!  It was the right mixture of sweet and savory.  Unfortunately for all of you J and I were in such a hurry to eat that we didn't get a chance to take any pictures of our ingredients or the process.  Whoops! 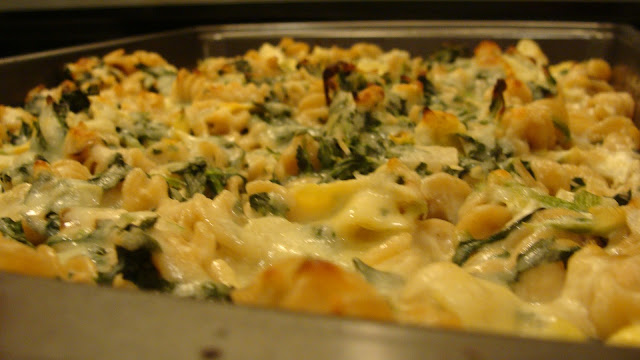 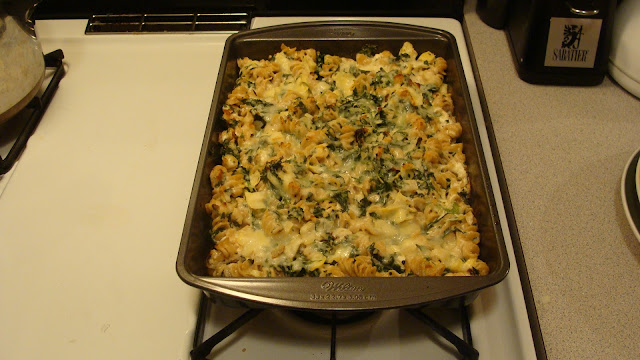 But doesn't it look so yummy!

Spinach and Artichoke Bake (adapted from Budget Savvy Diva)
What you need:


What you need to do:

Birthday in the City

This past Sunday was J’s 26th birthday and we decided to go to NYC to celebrate.  J and I are pretty familiar with the city and I’d have to say it is one of the biggest reasons we miss living more upstate because we used to live 10 minutes from the station and could hop right on a train for a day trip.  Now it takes a 40-minute car ride just to get to the station and then about an hour and 15 minutes (if you are lucky enough to get an express!) to get to the city from our new station.

Anyway, we go into the city around 11 and made our way to the TKTS booth in Times Square.  Many people groan about how all the tourists go to Times Square, but I could care less if I’m going to pay almost half of what the normal cost is for theater tickets.  We decided to go see Blue Man Group since it was different from our normal (Last time we saw How to Succeed in Business with Daniel Radcliffe.   It was fantastic). 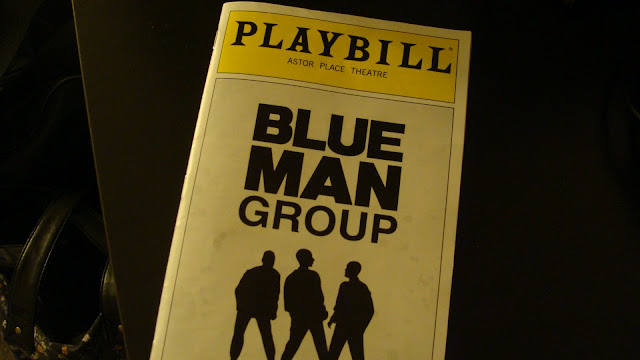 We had about 2.5 hours to kill until show time so we headed towards Rockefeller Plaza to walk through the NHL store.  J was hoping to find some ice hockey supplies there, but was sadden to find out it was mostly expensive NHL team jerseys and other merchandise.

Since the show was all the way down in the Village, J and I jumped on a train and headed downtown thinking we’d kill time down there.  We ended up grabbing some lunch at Soup N’ Burger: I got a turkey club and J had a bacon cheeseburger.  We still had time to kill so we walked around the area and found these crazy zip-tied stoplights and lampposts. 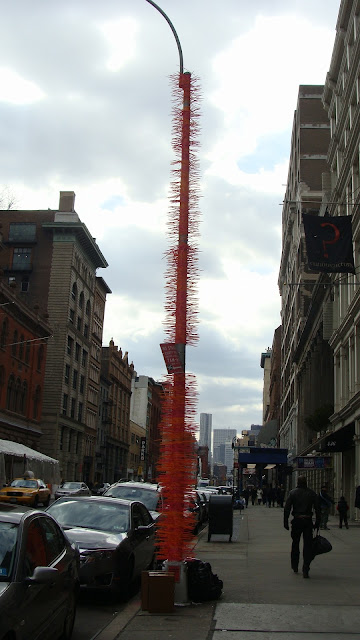 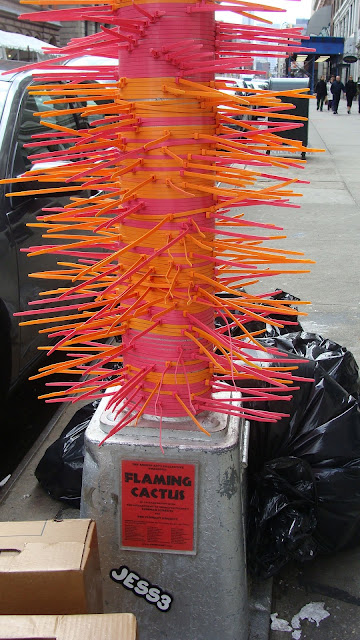 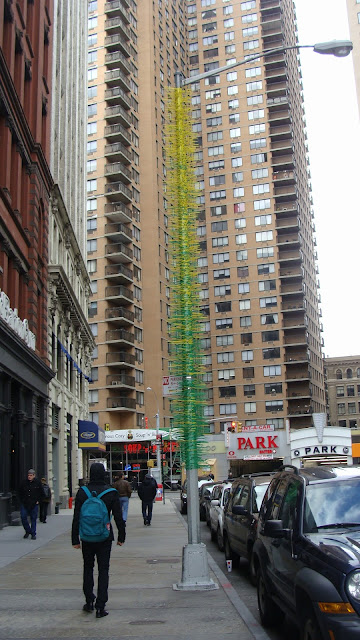 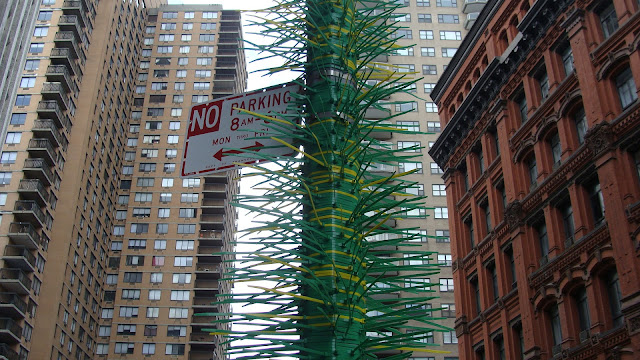 The show was definitely an interesting experience, especially since I had no idea what to expect.  There was a lot of music, paint splattering, audience participation and creepy blue man stares!  Overall we both liked it, but I just wouldn’t recommend it for anyone who hasn’t seen a show in the city, there are so many other really great choices for show to see.
We wandered around for a bit longer and actually had to look for another subway entrance because the train we wanted to take was not operating from the street we wanted to take it at.  Luckily in this area you really only need to walk a handful of blocks to find another subway entrance.  We went back uptown to see if we could find another hockey store that J wanted to go to, but unfortunately it was closed.

Since we couldn’t think of anything else we wanted to do, J and I checked the train schedule and were lucky enough to not only find a train leaving in twenty minutes, but also one that was an express!  We played back and forth games of Dice with Friends on J’s phone before he fell asleep.

We grabbed some Qdoba for dinner on the way home, J’s favorite East Coast Mexican food place (he loves Del Taco back in California).  Afterwards I lit up the candles on the small ice cream cake that I got him (tradition for us) and we dug into with just forks (no need to dirty any plates up!).   We spent the rest of the night relaxing (other than me preparing some meals for work this week) and groaning about eating too much food! 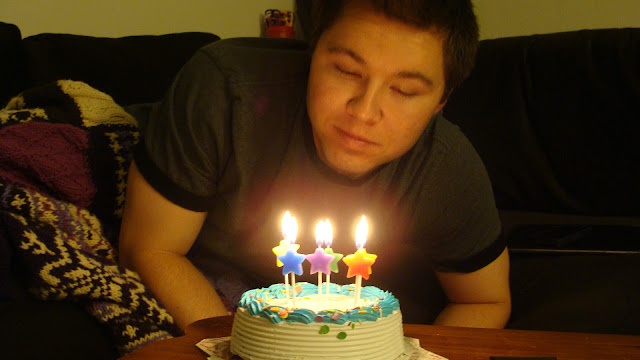 HAPPY BIRTHDAY J! Love you!
Posted by Jenny at 12:28 PM No comments:

Jenny
I'm a Jersey girl who loves to craft, cook, and go on adventures with my boyfriend and friends while blogging about what I think, DIY projects, recipes, and much much more.